W.W. Ward started this whole thing back in 1931 with 1 truck and 2 guys (and one of those guys was him). Good old roll-up-your-sleeves hard work and a growing number of dedicated colleagues helped Ward Trucking become the full catalog of logistics solutions that is now known as Ward Transport and Logistics.
Still family-owned and operated, and now with 1 ,400+ employees, the 4th generation of the Ward family knows that looking back is vital to moving forWARD!
1980
– Deregulation of trucking industry. Ward is now authorized to operate in the lower 48 states and so expands its direct foot-print in the Mid-Atlantic region. 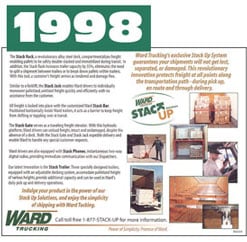 – Stack-Up Loading System introduced.
2000
– President’s Trophy from the American Trucking Association for best overall safety program in the country is awarded to Ward for the first of two times. Our company is built on one principle, be the most responsive and reliable shipping and logistics partner you have ever used. Ward Transport and Logistics delivers Obsessive Customer Service in the form of Less than Truckload and Logistics and Brokerage Services. We proudly serve 200+ million people in the US, Canada, Puerto Rico and Guam.